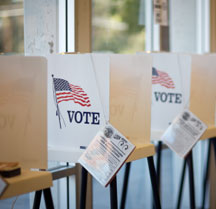 The following offices in the Village of Roselle are up for election on April 2, 2019: Village Trustee (3)

January 31, 2019
WRITE-IN CANDIDATES
Last day to file a Declaration of Intent to be a write-in candidate with the appropriate election authority or authorities (61 days prior to the election).