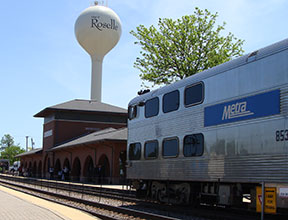 Overview
Trains have sounded horns or whistles as they approach crossings as a safety measure for more than a century. In the 1980’s, Florida imposed a horn ban and the Federal Railroad Administration (FRA) noted a significant increase in grade crossing accidents. As a result, over the years, the FRA and Congress have developed rules requiring that trains sound their horn at all grade crossings nationwide, and specifying the volume, length and pattern of the sound. The FRA has also established a very thorough process for establishing quiet zones, which prohibits the use of train horns at qualifying railroad crossings and thereby mitigating the effects of train horn noise on surrounding residents and business owners.

Roselle currently has partial quiet zones that cover the Milwaukee District West line crossings at Roselle Road, Prospect Street, and Park Street. However, the quiet zone only applies between the hours of midnight to 5:00 a.m. Outside of the midnight to 5:00 a.m. hours, train horns are sounded at these intersections. Even with a partial quiet zone, the use of horns is allowed at any time that the engineer believes a safety concern exists (such as cars or pedestrians on or near the tracks).

While the Village has been working on establishing permanent 24-hour quiet zones in the Town Center, law changes and jurisdiction rights continue to hold the decision in limbo. Approval is contingent on Federal Railroad Administration (FRA) and Illinois Commerce Commission (ICC) findings based on federal and administrative law. The Village has done its due diligence with a Quiet Zone Feasibliity Study and numerous outreach efforts to the FRA and ICC.

News of a rail line merger In December 2021 renewed talks about quiet zones with federal and state officials. Canadian Pacific Railway announced that it submitted an application to acquire Kansas City Southern rail network. If this merger were approved, it could result in 6 to 8 additional freight trains traveling through Roselle daily. It would also mean that certain mitigations intended to reduce the environmental impact of the increased traffic, including the implementation of quiet zones, could be implemented in Roselle.

Village officials will continue to work with federal and state officials to advocate for the entire community on this important issue.

Quiet Zone Established for Rodenburg Rd. Crossing
The quiet zone for the Rodebnurg Road railroad crossing officially went live on September 9, 2016.  As part of the establishment of the quiet zone, traffic channelization devices (vertical tubes that prevent vehicles from driving around lowered gates) were installed along the middle of Rodenburg Road on both the north and south sides of the crossing. Because the absence of routine horn sounding increases the risk of a crossing collision, the Village was required to mitigate the additional risk through the installation of the channelization devices. Horns within the quiet zone may still be used in the case of an emergency and to comply with federal or other railroad regulations.